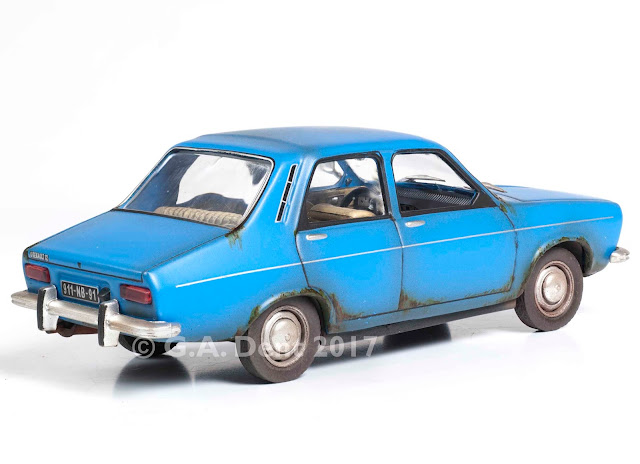 Why is it that when I'm rooting around in the attic looking for something in particular, I end up finding loads of other stuff I'd forgotten about, but not the thing I was initially searching for? Whatever the reason (it's probably because I need to organise my 'stash' better), this wonderful 1:43 scale Renault 12 appeared and I couldn't resist treating it to a bit of weathering.

Depicting a typical car from the 1970s, with plenty of corrosion along the wheel arches, doors and wings, the job only took a couple of hours. I ought to convert it to right-hand drive and fit UK style number plates, but that's a job for another day. It should look great parked up near the diesel depot that I've been meaning to build for a while...

The original packaging has disappeared, but I think the model may be from Atlas Editions, dating from the late-2000s.
Labels: cars derelict detailing O Renault scenery scenics scrap weathering