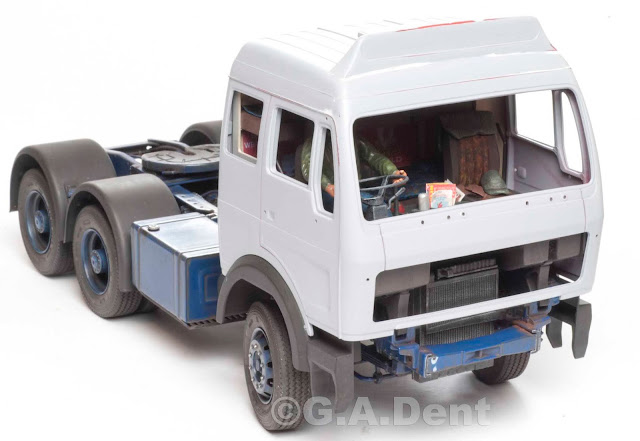 After a bit of fettling and adjusting, I've finally got the cab sitting correctly on the frames of this 1:24 Italeri Mercedes Benz 2238. After a few weeks of concentrated work, it feels like I'm nearing the home straight with this project, which has been very enjoyable. The Italeri kit might have thrown up a couple of challenges, but on the whole it's a great package.
Work on the cab interior has also progressed. The truck has been converted to right-hand drive, which involved quite a bit of surgery to the dashboard and cab layout. I've also sculpted lots of ephemera from epoxy putty, including bedding, cushions, bags and clothing, as well as a sandwich, an apple and a flask. Road maps, newspapers and posters have also been created - some of which are visible in this view, which reveals that our driver is a Liverpool fan. The truck exterior is to be blue, so maybe he feels the need to go overboard with all the Reds merchandise in the cab?!

The figure, by the way, is from a separate Italeri pack of truck detailing parts. Made up of several individual sections (four limbs, a front and rear torso and a head), he needed a lot of work, including a large wedge of epoxy putty inserted between his back and butt in order to get the correct posture to match the seat. Filling gaps and re-carving the fabric folds took a few hours. I also had to cut off his feet and reposition them to compensate for the presence of the pedals.

I'm happy with the patterns on the seats and bedding. The aim was to recreate those awful late 1980s/early 1990s fabric patterns - I had a duvet cover just like this when I was a teenager... 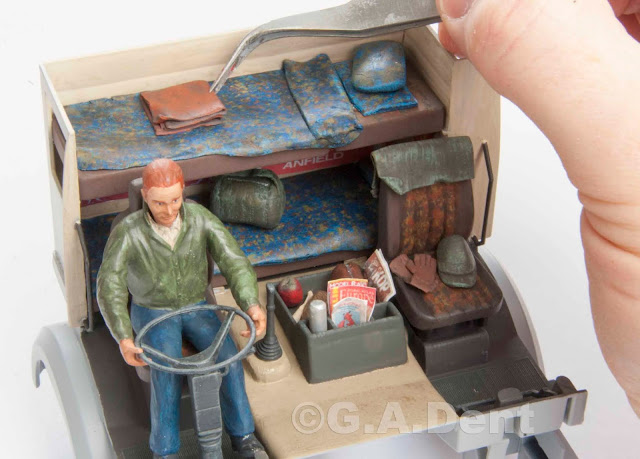