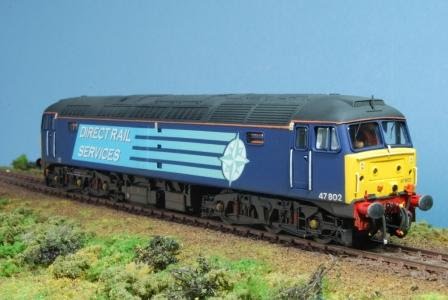 I’ve had Class 47s on my mind recently. No, it’s not an affliction, more that I had a tidy of my office last night with the intention of putting various completed models into storage (in other words moved from a pile on the floor into another pile elsewhere) and an extra pair of Duffs revealed themselves.

One is a heavily modified Lima model, converted to represent DRS 47802, complete with working lights (a First Class Trains unit). I do think that Lima made a pretty good fist of their ‘47’, although it does take quite a bit of work to get the best out of the basic moulding. Shame the motors are so unpredictable although, touch wood, this one is not a bad runner. A bit noisy though.

The other ‘47’ is one of the first Bachmann releases, renumbered (to 1741), detailed, weathered and with new headcodes. Specifically, the 6V53 refers to a southbound Severn Tunnel fully fitted freight routed over the S&C some time around 1970-74 (from Kingmoor or Mossend, I think). The other end carries 3S25, a northbound parcels.

Both of these projects were done for my book on detailing OO diesels & electrics and they provide an interesting contrast between the two models that were produced 20 years apart (Lima: 1987 and Bachmann: 2007). 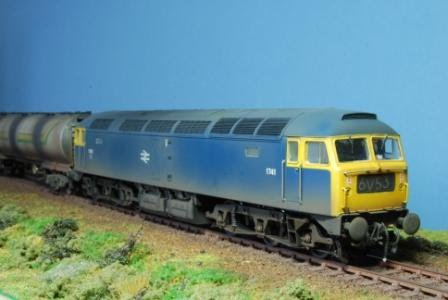