THE END OF DENT

After 15 years of frustration, I've finally given up! 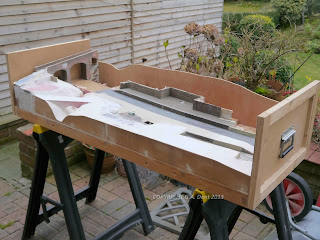 It was with a heavy heart that I finally bit the bullet and demolished my model of Dent station. After numerous attempts, the increasingly battered baseboard has become a real obstruction in the shed and, with no realistic prospects of the project going any further, the decision was made to break it up. Having moved all over England in the past 15 years, and doubled as a shelf, storage crate, housing project for mice, and latterly a feline hangout, the partially boxed-up baseboard simply ran out of lives. In truth, I'd lost heart in the project a few years back and was only keeping it for sentimental reasons.

However, that's not to say that my Settle-Carlisle layout plan is completely dead. Rather, I've finally realised that it makes more sense to go for an 'N' gauge recreation. After all, it was the idea of capturing the scenery that appealed the most - the trains were secondary. Thinking how much more I could fit into the same space was the real clincher, but I think the project will have to wait until I've moved house and settled somewhere permanently. Then I can do the job properly! 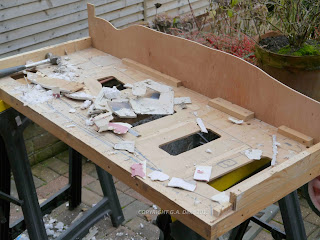 The main frame of the baseboard is far too good to waste, being built from high grade, knot-free, straight-grained pine, with dovetail and half-lap joints and not a screw in sight. I was studying furniture making at the time, and getting as much practice in as possible. After so many house moves and periods stored in cellars, attics, sheds and garages, the timber frame has proved 100% reliable. If only I still had the time to take so much care with my baseboard construction.

Having stripped the board back to the bare bones, I'm planning on re-using it for one of my other layout projects - most probably my wartime recreation of the Western Desert Railway, in Egypt. Watch this space...