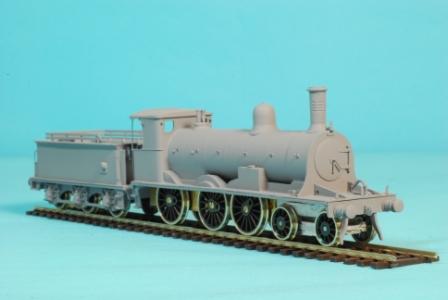 With the latest Model Rail now on sale (MR141), I thought I’d add some extra info about the DJH Jones Goods 4-6-0 kit that features on pp.36-41. As the feature - and a previous blog posting - relates, this frustrating and long-winded project is still far from finished.


At present, the frames are about to be treated to a first coat of etching primer (Railmatch) which will provide a long-lasting base for the subsequent top coats. I’ve still to refine the shade of yellow to adorn the locomotive and tender as the 1960s BR version of the Highland Railway colour was far different to the original specification, which is offered in the Phoenix Precision range. 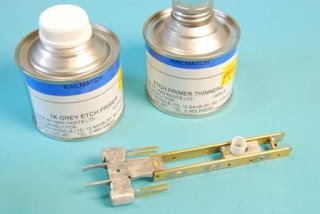 Railmatch etching primer and thinners arrived in the post recently and the frames are due to receive a coating in the next few days.

One thing that the building of the Jones Goods chassis brought home to me was how much I rely on the use of my Dremel vice. I was given this handy device way back in 2007 as a review sample (see MR107) and it’s certainly seen plenty of use since then. Despite being plastic, it’s tough and steady and has relegated my old cast iron vice to secondary duties in the shed. As the following images show, it can still be used for soldering tasks, provided a set of spring clamps are used as an intermediate holding device, absorbing the heat before it reaches the plastic jaws. 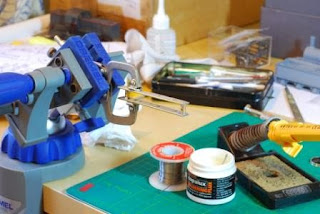 How could I live without my Dremel vice?! It can rotate and tilt to any angle, making jobs such as this much easier. 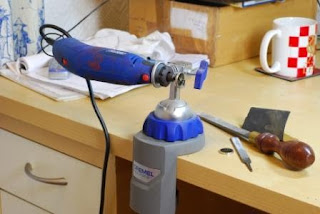 And it can be used to mount many brands of mini-drills - perfect for the job of turning down the wheel flanges for the Jones Goods.

The other good thing about the vice is that it can also be used to mount a mini-drill (most brands will fit – I use a Draper tool). As I had to file away the flange on the centre driving wheels, mounting the drill and using it as a sort of lathe proved really handy. I believe that the preserved No.103 now carries flanged wheels, but this isn’t possible on this model as can be seen below. The flanges of the two forward axles simply won’t fit side by side. 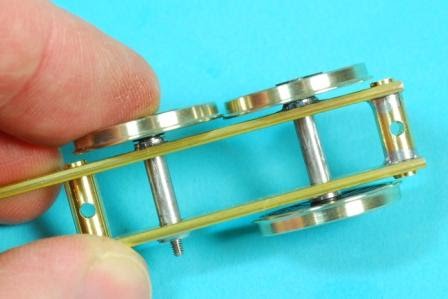 No room for the flanges on both the leading two coupled axles... 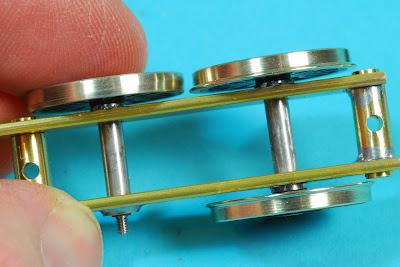 But now they will fit! Removing the flange must be done with great care not to disturb the wheel's profile.

One of the main bug-bears of the DJH kit is that the frames, if assembled as per the instructions, are too wide to accommodate OO gauge wheelsets. As a degree of side play is essential for coping with even the slightest curves – especially for a long coupled wheelbase machine like this – some drastic action is necessary.

Filing down the top hat bearings after they’d been soldered in place did the trick, with the axles being re-fitted a few times until happy. Trying to achieve the same amount of protruding material on both sides of the frames took some careful measuring and filing, keeping the bearing faces as flat and true as possible. The bearings now stand 0.3mm above the surface of the frames on each side and, due to these bearings being quite deep in the first place, there’s still just enough surface area available to keep the axles happy. 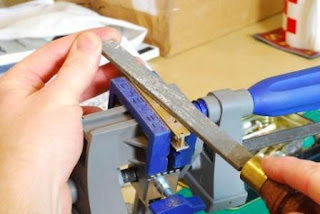 Filing down the raised top hat bearings also requires care - and can be a lengthy process.


So, what started out as an idea for demonstrating brass chassis building for relative beginners, turned out to be a bit more complicated than I’d envisaged. I do wonder what the future holds for such kits as the r-t-r market becomes a little more diverse. I seem to be meeting fewer modellers who are prepared to go down the kit building route, mostly for reasons of time, cost and lack of confidence in their ability. Indeed, it’s the fear of spending the best part of £200 on a kit, motor, wheels, paints, transfers etc, then making a hash of it, only for the bits to then languish in a box for years.

Not all kits are so expensive, but with the ever-increasing costs of metals, even a set of wheels for a 0-6-0 can set you back around £30-40. I suppose you really have to want a specific loco type, that's otherwise unavailable RTR, to go down the kit-building route. Unless, of course, it’s the construction aspect that is the attraction. I must admit that I prefer to build wagon kits rather than buy RTR stock and this has nothing to do with the inadequacies of ready-made wagons. I just love building them.
Labels: Airbrushing brass chassis DJH Jones Goods kit building LMS loco OO painting Railmatch Steam whitemetal