A LESSON IN WIRING 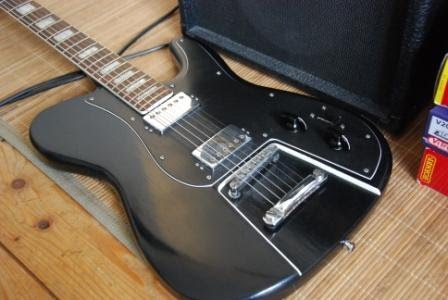 Just spent most of my Sunday repairing one of my guitars, which should have been a fairly swift task. However, the wiring inside is a legacy from my late teen years when I was (a) skint and (b) not known for my careful planning.

Although the way that the two pickups were connected was quite nifty, with a 5-way switch but also coil taps and series-parallel shifts, alas none of the cable had been colour-coded (red, green and blue for the various earths, for example) so making any repairs or mods has long been a challenge. 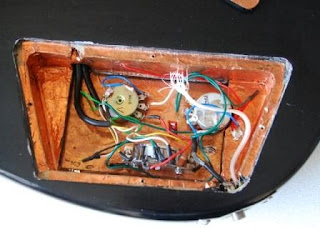 None of the wires are colour coded - but it all works! The copper lining, by the way, screens out interference

Still, I was only 17 and the guitar was built in its entirety as part of my A-level work, so I shouldn't be too hard on myself. Funnily enough, the model railway layout that I built around the same time also featured some ambitious electrics - point motors, switched frogs, colour light signals with route indicators linked to the points, lots of isolation sections and plenty of power feeds, plus lighting in every building.

Sounds great, doesn't it? However, it was virtually ALL wired up with red cable. How stupid that soon turned out to be. But, I could only afford one drum of wire at the time. Never again.

Back to the guitar and, after an hour or two's head scratching, I decided to simplify the setup, replaced the volume control (that was the reason I started poking around in the first place) and - believe it or not - kept the eccentric colour coding of the wires. Well, it's lasted nearly 20 years, so it seemed a shame to change it now. At least the guitars that I built in later years, as a semi-pro luthier, were much better thought out.... 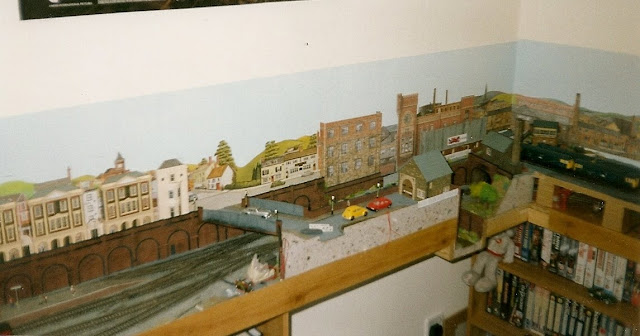 Tuebrook in 'OO', c.1995. I miss this layout but the wiring was haphazard to say the least.

I shall have to dig out some more images of this and other old layouts and post them here. Watch this space...
Labels: electrics guitar layout OO repair