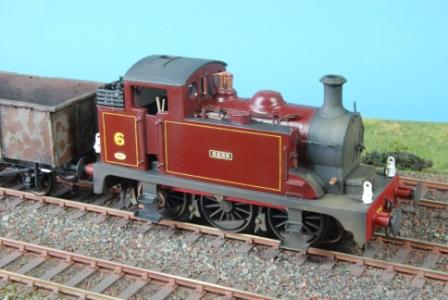 With many hours’ worth of work and countless individual detailing parts, this little loco has been transformed from its humble beginnings.

Over the past six years, since starting as Model Rail magazine’s Model-Maker in residence, it’s been curious how some of my work has created a lot of interest. It’s taken me a bit by surprise on occasions as what might be expected to be a popular subject garners little reader feedback while the odd obscure project has seen my email inbox flooded with queries for more information.


I suppose a lack of response to the more mainstream subject matter indicates, at least, that I didn’t do anything wrong (we’re always quick to notice a mistake, are we not?) but the amount of interest that certain models have garnered has been immensely gratifying, especially as I spend a lot of time working alone, apart from Maude the cat, but she’s not that reliable a critic!

One of the most ‘popular’ models over the years has been Bess, my little freelance industrial 0-6-0T converted from a Bachmann Junior loco.  She’s featured in Model Rail once or twice, graced the cover of the Model Rail Scenic Expert DVD and formed an important part of my second book on steam loco detailing. I also displayed her on the Model Rail stand at Warley and Glasgow, inviting a fair few enquiries as to her ‘particulars’. 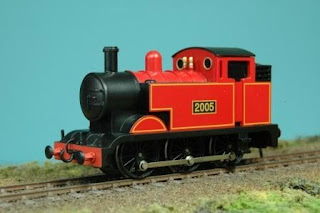 The basis for Bess. This Bachmann Junior 0-6-0T is designed for a kid’s layout although it’s also perfect fodder for a super-detailing job.

Built a couple of years ago, she’s still generating emails and correspondence, so please allow me to add a little extra info here for anyone else who’s interested... The latest raft of enquiries has been in relation to the detailing parts added, especially into the cab interior. As mentioned above, the project is covered in full in my book Detailing and Modifying Ready-to-run Locomotives in OO gauge, Volume 2, so I don’t want to repeat it all verbatim. Not least as the parts list is such a long and eclectic one (whistle and dome from a Stanier 4-6-0, safety valves from a Midland 0-4-4T and so on), most of them coming from the scrap box.

As for the cab interior, however, this was formed from the backhead from an old Airfix plastic kit of a GWR Prairie tank and a number of parts from a splendid etch offered by Mainly Trains (ref. MT227), consisting of handwheels, regulators, reverser levers and other smaller items. All for just a few quid! As the plastic backhead moulding was from a GWR loco, the reverser had to be carefully cut away without removing too much other detail, with an etched lever refitted on the proper side, more appropriate for an LMS man! 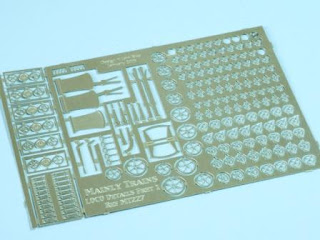 The Mainly Trains etch that provided most of the cab interior details. 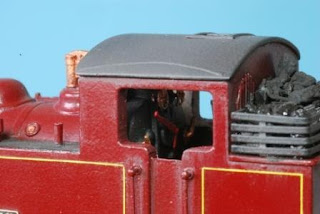 The solidly moulded cab takes a bit of work to open up, especially as it houses the small circuit board for the power unit that must be moved into the smokebox void. As this bodyshell was also used for Bachmann’s Thomas range in the USA, the smokebox has room for a simple mechanism that allows the eyes to move from side to side when in motion.

At present, Bess is residing in a box in Carnforth, awaiting repatriation back to her home on Maudetown Colliery, having been filmed for inclusion in the imminent new DVD release, The Model Rail Detailing Expert. I think she’s beginning to get used to living life in the spotlight! I still haven't got round to adding a footplate crew, though...
Labels: 0-6-0T airfix Bachmann book books detailing DVD industrial loco Maude Maudetown Model Rail Steam