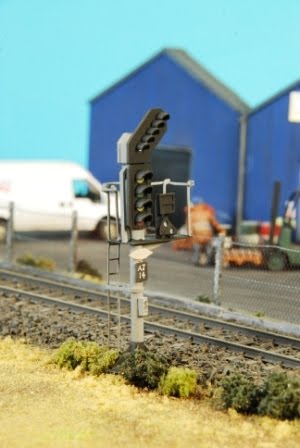 As mentioned a few months back, I've been working on a number of colour light signal kits for a future Model Rail feature. I've managed to build a few now, doing a bit of work on them here and there when I get a spare hour or two and, for someone who's never really been that interested in modern signals, it's actually proved an interesting project.

Above is a semi-scratch-built signal using a set of etched Comet Models parts and Knightwing 'dummy' head and 'feather' board. I think I've made the handrail a bit over-scale but never mind - it still looks ok. Below is the completed etched brass gantry from Traintronics (featured in the earlier blog entry whilst being assembled), again with a pair of non-working Knightwing signal heads. This will look great straddling a 4-track mainline, although I don't have such a layout to pose it on, unfortunately. Maybe I should knock-up a diorama? 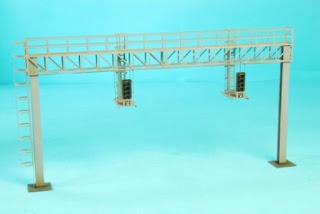 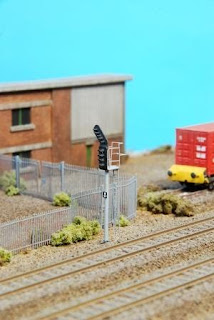 Moving down to 'N' gauge, this great little 4-aspect unit is from NBrass. Although it's not illuminated, it looks ultra-realistic. It's also ultra-delicate, especially the ladder and handrails. Not too difficult to assemble, though.

Now that these colour light signals are complete, I need to build a few semaphores too. I've got a few Ratio and Model Signal Engineering kits in hand already but, for such an important aspect of model railways, there's surprisingly little choice in the signal market. Maybe that will change in the future...?
Look out for the signal feature in Model Rail in the near future... 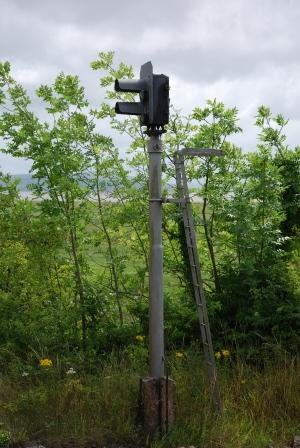 I snapped this interesting 2-aspect signal between Grange-over-Sands and Kents Bank a few weeks ago. It's the post that I found most intriguing, made up of a tall concrete base and a steel post of varying diameter.