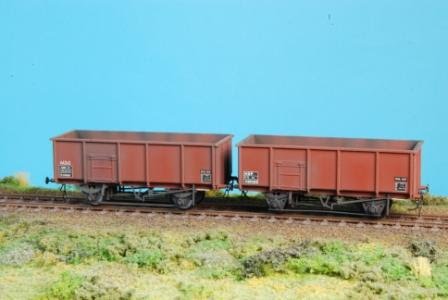 Another three 21t mineral wagons are fresh off the production line today, destined for use on my Maudetown Colliery layout, when running in the late 1970s/early 1980s era. Above is a pair of re-bodied opens, coded MDO. Well, one of them is an MDO, the one on the right has been through-piped for used in vac-braked trains, so carries the code MDP. Using the Parkside Dundas kit, the underframes have been modified with roller bearings, new heavy duty springs (on the MDO) and a few other extra details. 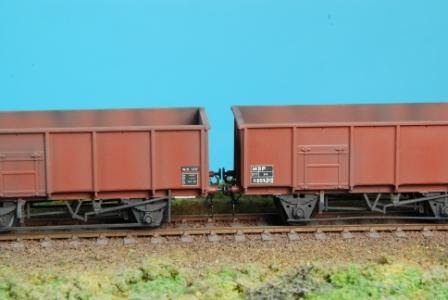 Note the different springs on each wagon. No two of these things ever looked the same! 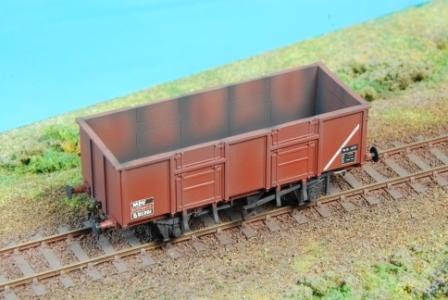 Also amongst the trio is another Chivers 21t MDV, as mentioned in a number of previous postings. I've still got another 4 of these kits to build and, again, no two of them are the same, with a few small variations added to each kit during construction. Each of these wagons is to be left empty. Indeed, part of the reason for me having to expand my fleet of minerals is that virtually all my previous models were built fully loaded and I want a bit of variety in my coal trains in and out of the colliery. 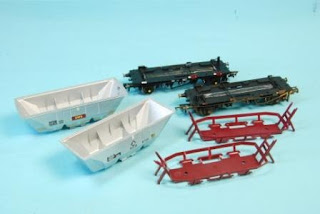 To augment the 1980s-era operation of the layout (it's planned to be able to shift from 1960-1985 by simply changing the stock and road vehicles), I've finally started to assemble a small fleet of air-braked hoppers, something that I've been intending to do for years. First up is a pair of Hornby wagons being back-dated to the original spec HAA. Using what I've been able to beg (from the MR cupboard!) and obtain cheaply (from Hattons), means that a little conversion work is also needed. As we only had some CDA china clay hoppers in the Model Rail stash, I've had to pull away the unwanted fittings and plug a few holes. The hoppers, support 'cages' and underframes are now stripped and ready for repainting... watch this space! 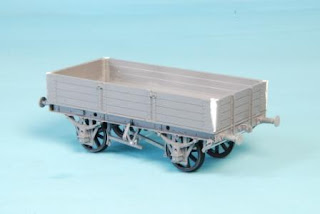 I've also just built an 'O' gauge GWR open wagon from a CooperCraft kit. Some of the small underframe parts needed a lot of work before fitting, especially the buffers that had been badly moulded (the two halves of the mould looking to have been seriously mis-aligned). Other than that, it was good fun to build and made a nice change. This wagon is to form the basis for a few demonstrations in my next book project, namely weathering and creating realistic 'natural wood' finishes with an airbrush.

Also on the bench this week has been a Ratio pump house, a Lima Class 121 departmental DMU conversion, a Bachmann Turbostar, a Class 14, various 'steel' wagon loads and countless weathering powders and pigments for a future Supertest. It's been a very busy week..!