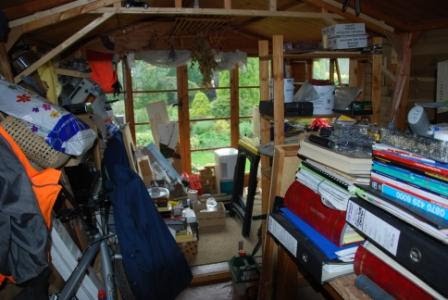 Tidiness was never my strong point, but this is ridiculous!

My shed situation reached something of a crisis point a month or two ago with too much stuff being crammed into too small a space. What with having to work in there as well, and with a few different layout projects vying for room, something had to give. There was also the small problem of the shed itself looking in danger of partial collapse thanks to lots of rotten cladding and a leaky roof.

In Spring, I’d knocked the two separate ‘rooms’ within the 12ftx8ft shed into one big space, having to construct a support for the roof in the process. This did improve matters with a bit more room to move around in, plus space for countless shelves to be erected here and there for paints and dioramas, etc. However, this improvement didn’t last long as the shed soon filled up with other junk (including a 12in:1ft scale semaphore signal arm and assorted bits of railway track). As I wanted to re-clad and re-model the outside of the building, before insulating and cladding the inside too, that meant that there was no point building any proper storage until that work had been done. But when would I get round to it? 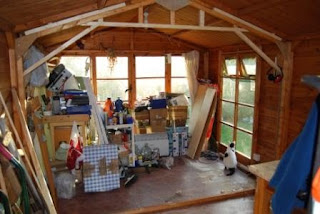 Opening the two sheds into one made a big difference, but the space was soon filled with lots more junk.

More pertinently, the question was when would I get some dry weather to coincide with the spare time to make a start? Well, the bank holiday weekend saw the first sunny day around these parts for ages so I took the plunge and began ripping away the rotten cladding from one side, replacing with a more attractive feather board style. After two days’ work, I’ve nearly finished one full side. With nowhere to stick all the stuff from inside the shed, everything has just been piled up in a heap until the inside of that wall is finished and I can get some shelves up. Once that’s done, the process will be repeated on the other side.

Hopefully, the lion’s share of the major work will be done before Autumn and the re-wiring and extra lighting can be finished later. What’s more important is that I’ll be able to give Maudetown Colliery a more permanent position along one side, shared with my wartime African layout. Along the other wall, in theory, will be Dent station. In a truncated form, unfortunately, but at least it’s a beginning... 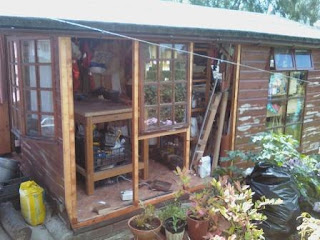 The exterior re-cladding got underway over the bank holiday... 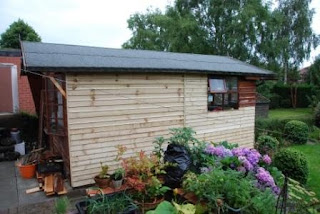 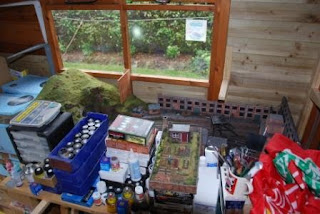 Somewhere behind the piles of stuff is Maudetown Colliery and Dent Station... 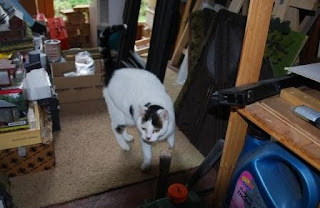 Maude's been complaining that she can't get through her cat flap, although all those dioramas stood on end have proved popular as scratch posts, especially the turntable that is to feature in the next Model Rail. Just glad that I'd already photographed it.
Labels: buildings Dent layout Maude Maudetown repair shed