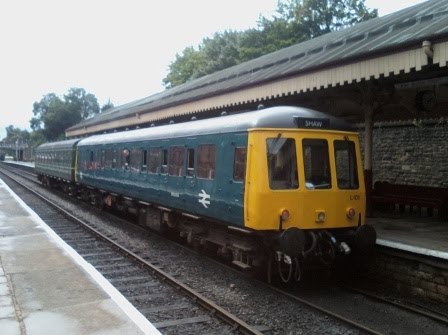 At the weekend we took my 4 year old nephew to the East Lancs for a bit of brain-washing in all things railway. Comprising of a train ride to Manchester Piccadilly, followed by a tram to Bury, I think he'd had public transport overload before we'd even got to Bolton Street Station. I don't know if it was the poor weather, but the railway was pretty deserted for a weekend in school holidays and we had a ride to Heywood and back with a Cl121 bubble car almost to ourselves.

Sat right behind the driver, it was a joy to look at the line ahead and listen to that lovely chugging sound of a first generation DMU - it brought back many a happy childhood memory. Little Joey, however, was not in the same state of reverie as myself and, with that knack of 'kiddie honesty', he simply came out with the killer line: "Why are we on this old train?"

Hmmmm. Maybe he would've preferred a ride behind the Jinty, but then you can't see the track or driver in a Mk1 compartment. I think he was more interested in his dinosaurs and his packed lunch. Anyways, I really enjoyed it. And we got an ice cream in Ramsbottom - in the rain!

Other than that, I've been hard at the grindstone, working on the Turntable Supertest for Model Rail issue 148. Having built and motorised a Peco OO gauge 'table, I just need to build the layout to go with it. Hopefully it'll be a tiny MPD diorama for display at Model Rail Live at Barrow Hill on Sept 24/25. 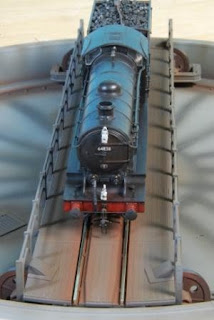 This Peco turntable kit has been built and motorised using a bespoke power unit from Expo Tools. Look out for a full demo in MR148. 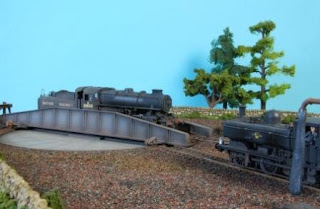 I've also constructed a Dapol (ex-Airfix) turntable kit, complete with a diorama, to offer an alternative to the more expensive Peco offering. For under £10, it's not too bad, but operating it is a bit difficult. See my cheap and cheerful solution in the next Model Rail...