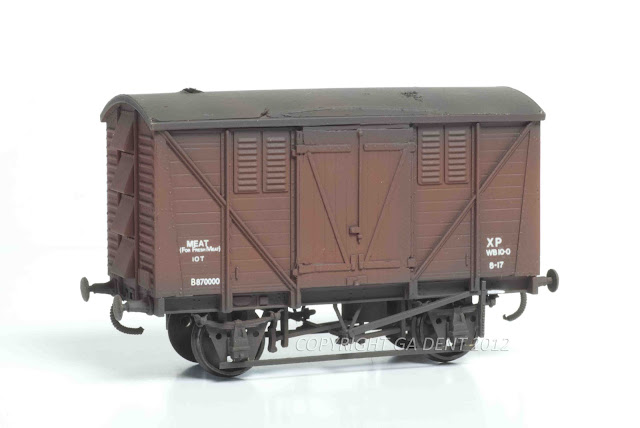 As mentioned previously, I've been working on a few old Airfix wagon kits that have been knocking about in my collection since the early 1980s. This BR 12t meat van was one of the oldest and, despite the body being a bit damaged (from an early, aborted attempt at assembly), looks pretty good. The kit is nearly as old as I am, but probably looks more youthful...

In an earlier post, I showed how the underframe had been upgraded to include compensated etched brass axleguards and these offer a vast improvement to the chassis. Again, as has already been mentioned, the original waterslide transfers have been used, save for the BR running number that came from a Fox pack - I still can't believe that they worked so well, with no sign of yellowing or cracking.

One of the last steps has been to finish the roof: thin paper has been applied, with a couple of holes and lifting corners to mimic damaged roofing felt. This is the first time that I've tried this technique and, while it isn't perfect, I'm happy enough with the results. All that's lacking now is a set of working couplings, but I've run out of my favourite Smiths units, so they're on the list for my next trip to the model shop.