Back to work after a short break in the South East 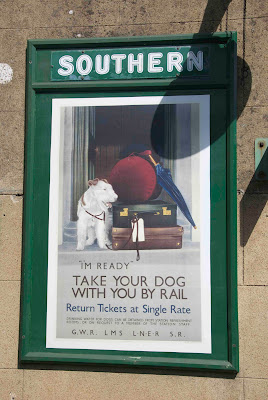 I might have been home for a few days now, but it's taken a while to settle back into the day-to-day work routine, not least as I spent a day and a half simply wading through emails. However, a sense of normality has now returned and I've just been testing some exciting new weathering dyes from ModelMates for a Model Rail Workbench Test in issue 171.

Last week was spent in not-so-sunny West Sussex where we seemed to bring the damp Northern weather to the drought-threatened South. The little village we stayed in suffered light flooding and a two-day power cut, so the break was not without incident. But, hey, it was all good fun. On the way to our digs, I took the opportunity to call in at the Mid Hants Railway HQ at Alresford. Unfortunately, it was a Monday and no services were running, but the station was open and I had a good look around. The shop in the old goods shed was also open for business and I treated myself to a couple of Dapol LMS coach kits, having been inspired by the article in the latest Model Rail.

The reason for the jolly down south was to teach my airbrushing courses in Lancing over two days and they both went really well. A big thank you to everyone who came along - it was great to meet you all and I hope you keep practicing!!