A NEW SET OF WHEELS 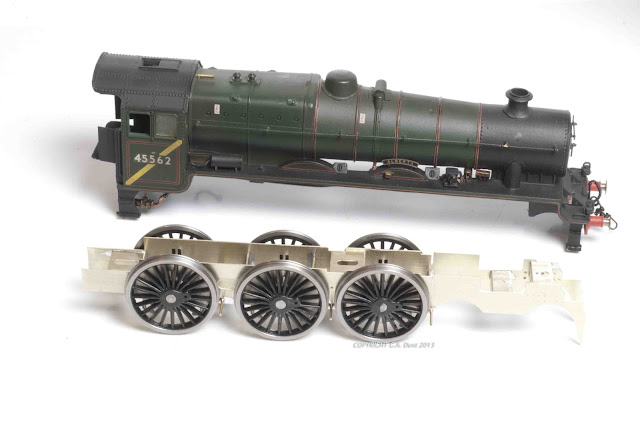 In the dim and misty past, I upgraded a Bachmann 'Jubilee' for Model Rail mag, settling on a rendition of the much-loved - although sadly not preserved - Alberta, a famous survivor of the class in the later days of BR steam and, most pertinently for me, a regular on the Settle-Carlisle line in the late 1960s. In that article (issue 100, Feb 2007), the original model was extensively detailed and completely repainted, with the chassis receiving a new set of motion and brake gear. The old Mainline split chassis was a lovely, smooth runner, so instead of building a completely new underframe, a cosmetic makeover prevailed.

Fast forward to 2013, however, and the Bachmann chassis is now ripe for retirement and a Comet Models kit has been obtained. Motor, gears and wheels are also in stock and the frames have begun to take shape. After only an hour or so of pottering with the soldering iron, reamers and files, the assembly is now rolling freely over my workbench, ready for a test-run on the rolling road with the power-plant installed. I've fitted a set of Gibson wheels during the early stages, although a look through my kit stash has just revealed a set of Markits versions that I must have bought and put away for a rainy day. I may well opt for the latter, not least as they're easier to work with. And as they come at a considerable cost, I think I'd like to get my money's worth out of them!

Once the transmission and coupling rods have been assembled, I can make a start on the cylinders and valve gear - which should be fun...