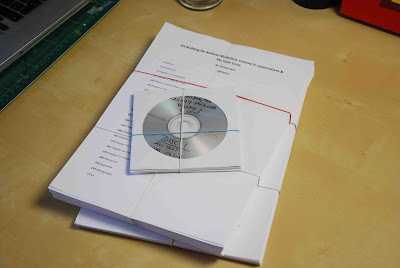 Having recently announced that my next book, Kit Building for Railway Modellers, Volume One, was available for pre-ordering from Amazon and other book stores, I've now just completed the manuscript for Volume Two, which deals with the assembly of  locomotives and multiple units. Hopefully, this second instalment will be ready for publication in the Autumn.

Weighing in at over 350 pages of A4 and nearly 600 images, this has been a real labour of love over the past few years and I'll be happy when the proofs are done and the book is ready to go. It takes a lot of work to produce a book like this and, compared to writing for a magazine - where you're part of a team - the process is very different. But, with this being my fifth title with The Crowood Press, I suppose I'm now used to the solitary work involved.

With demonstration-style tomes, of course, it's not just a case of writing down what you know, but you also have to show how it's done, which involves a lot of extra practical work. However, this project has allowed me to work on some interesting models, erecting a few nice chassis kits along the way, some of which still need to be finished off. Readers of this Blog may also recognise some of the locomotive kits within the book, as they've made a few fleeting appearances here in the past.

Look out for more info on both volumes here and in the modelling press in the coming weeks.