GEARING UP FOR SMOOTH RUNNING

J72 project gets moving with an Exactoscale gearbox 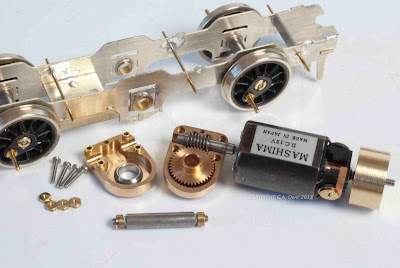 I must have reviewed this Exactoscale gearbox for Model Rail magazine about 6 years ago and, at the time, I hadn't seen anything like them. Accustomed to the traditional etched casing, with one, two or three stage gear wheels, these enclosed units seemingly took loco building into the realms of clock-making excellence. Maybe it was due to unfamiliarity, but they've been sitting patiently in a box awaiting gainful employment ever since. Finally, though, I've found a suitable use for one of them, as part of an etched replacement chassis for the elderly Bachmann (ex-Mainline) model.

Available from Mainly Trains, the upgrade kit consists of frames, coupling rods, brake gear and an array of detail parts for the plastic bodyshell. Although a DS10 motor and gearbox was provided with the kit, I'm using the Exactoscale transmission in conjunction with a superior Mashima can motor, complete with flywheel. Under initial testing, the chassis has been moving very smoothly and efficiently, although the gears do need a bit more time to bed in, being a little tight to begin with. As the units are tightly sealed, it's important not to add too much lubricant (or too thick a viscosity of oil), lest you create a 'hydraulic lock', thus seizing the parts up.

I've just stripped the frames down again so that they can be primed and painted, leaving final testing and the fitting of the brake gear until later. I'm not sure when that later will be, as I don't yet have an issue of Model Rail in mind for this project. In fact, I really must clear a few other tasks first, not least as I've recently been inundated with review products from the likes of Humbrol, Albion Alloys, Dremel and Lifecolor. There simply aren't enough hours in the day....!
Labels: 0-6-0T Bachmann brass chassis J72 kit building loco Mainline nickel silver Steam