The answer to my prayers arrives! 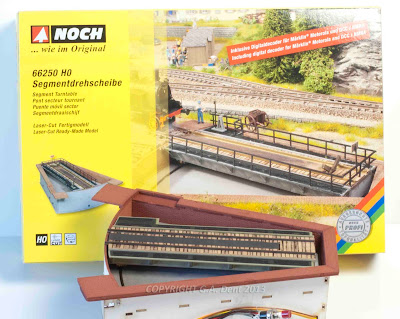 Having a few small layout projects on the go at the same time can be a bit distracting, as one problem arises while another is solved, only for another to rear it's head and a change of plan elsewhere confuses the whole lot. While Maudetown Colliery's extension continues at a snails pace (but fairly stress-free so far), my modern MPD is also finally moving forward. But, my ultra-mini GWR terminus had ground firmly to a halt until Peter Marriott put me on to the new Noch Segment Table.

This three-way automated traverser comes fully built, wired and ready to go. Indeed, it even has a DCC chip installed, if that's your cup of tea (which is not for me!). All you need to do is cut a hole in the baseboard using the supplied template, connect up the power, align three tracks and Bob's your uncle. The staging is quite small, so it'll fit an 0-6-0T or small diesel such as a Class 14, and that suits me. You can even get an 0-4-0T and a small 4-wheel wagon on it at the same time.

The only problem is that I can see how this space-saving device will make life so much easier on my other layout projects. So much so, that I've been posing my Maudetown NCB locos on it, just to see how they look and wondering if it will suit the colliery atmosphere, or if it would be best mounted off-scene.

Taking out a 3-way or two 2-way points with this table offers up substantial (in relative terms) sidings space, so I'm now in a quandary over whether to alter my well laid plans for the colliery extension, or to keep this table for its original purpose, as a means of creating a run-round loop, slightly off-scene, on my GWR terminus. Or even creating something new with the table as the focal point, rather like Peter did with his Segmore Warehouse layout... decisions, decisions...