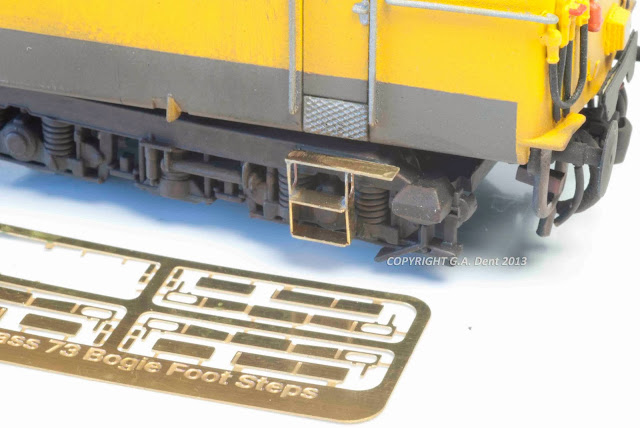 Although Dapol’s ‘OO’ gauge Class 73 is likely to eclipse the venerable Lima offering, that is now produced by Hornby, the older model remains ripe for a detailing uplift. Indeed, there are many suitable components available from the likes of Shawplan and these new etched bogie footsteps, from PH Designs, are a welcome addition. Offered in a pack of four (to treat one locomotive), they are simple to fold-up and short mounting pins are incorporated to allow simple and secure fitting.

Assembly is equally effective with solder or cyano-type adhesives and the upright sections even include the distinctive oval cut outs for a very realistic appearance. Short right-angle brackets are also provided to support the overhanging section of the top step.

These steps address the glaring omission of any suggestion of footsteps from the Lima/Hornby model (how did they expect their little drivers to get into their 'office'!) and, with no existing moulded units to hack away, this provides an ideal evening project for budding detailers. Simply fold them up, drill the mounting holes and Bob’s your uncle!

The Lima '73' dates back to 1986 (is it really that long?) and I can remember it hitting the shelves of my local model shop. With the real locos being based down south, they weren't really my cup of tea at the time but, once a few of them moved up to the Merseyrail network - to work maintenance trains - I had to have one for my layout set in Liverpool's inner suburbs. Luckily, one of my mates was getting bored with trains and selling up his gear, so I managed to get a nearly new Inter City liveried '73' and a few Lima Mk1s for the price of a few pints. The loco was quickly painted blue,  renumbered as 73905 and put to work on ballast trains around 'Tuebrook'.

Quite a few years later, when Hornby brought out the ex-Lima model, I revisited the Merseyrail Class 73 theme for Model Rail, with a more accurate rendition of 73905 and another example, 73906 in Merseyrail yellow and grey (see issue MR117, May 2008). Back then, I built and fitted sets of A1 Models bogie footsteps, but these PH Designs units are far more impressive. Just a shame that I no longer have my Tuebrook layout...!