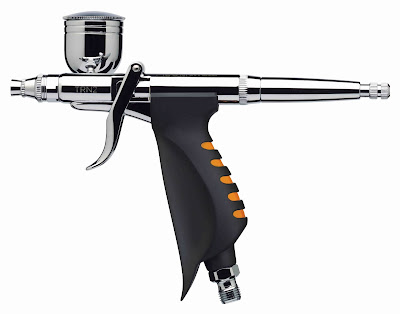 I've spent the past few weeks trying out a new airbrush in the 'Neo for Iwata' range, and have been impressed with the results. Offering high spec tools at lower prices than the 'real' Iwata range, this airbrush compliments the very impressive Neo 'CN' dual action airbrush released last year. The pistol-style handle and trigger is really comfortable and saves the old aching fingers, especially when working on larger models or when doing any scenic work. There's an adjustable needle travel guide at the back too, that governs the amount of paint emitted, thus offering a safeguard against putting too much liquid down too soon. There's also a choice of 3 paint cups supplied, to suit different sized jobs.

Build quality appears impressive and the performance is jolly good. This TRN2 is a side-feed unit with a 0.5mm needle/nozzle combo, and so is a real maid of all work. It's especially suited to priming and overall livery coats, as well as varnishing and other general tasks. I've managed to do some decent weathering on OO gauge models, but getting very fine streaks is asking a bit much. Instead, a gravity-fed version, with a 0.35mm nozzle is also available with the same trigger style, the TRN1.

Stripping the tool down for cleaning is easy, although I did manage to break part of the nozzle, although I suspect that my advance review sample had had a rough time in the post, as it wasn't packaged in the fetching (and secure) box that the production tools will be. Either that, or it was my incompetence(?!). Once I'd apologised profusely and received a replacement, I've been using the TRN2 solidly for a month with no complaints. Besides, a 5 year warranty is provided with these tools - if bought from a licensed dealer - so the makers are very confident that they'll last.

You can tell that this Taiwanese-made tool is not a 'real' Iwata, as it feels lighter and it lacks the supreme finishing of the Japanese airbrushes. But then, you're looking at near £300 for an Iwata Revolution TR2 with an equivalent spec. At £130, the Neo TRN2 looks to be worth the investment.

If I could sum it up in terms of 1980s Ford cars, the Neo TRN2 could be likened to the erstwhile Escort GL, as compared to a 'real' Iwata being the top of the range Granada (were they called 'Scorpios'?). The cheaper model may lack the superior engineering and extra attention to detail, but it still has the potential to be a reliable workhorse, with more 'trim' than the Escort 'Popular' model and certainly more power than a Fiesta!

For more info, see the Airbrush Company's website and look out for a full review in Model Rail magazine in the next few months.
Labels: Airbrushing Iwata painting review scenics weathering