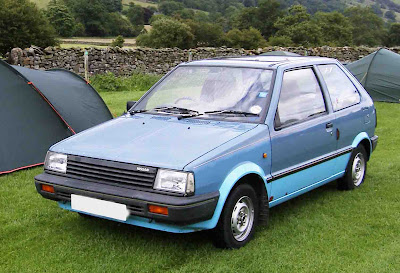 Milly in her golden years - getting on to 20years old but still shlepping up to Dent on a regular basis!

It was with a heavy heart that I finally accepted the inevitable and decided to scrap my beloved old Micra. She departed her temporary home (in Gloucestershire) over the weekend, destined for the great automotive abyss and will be greatly missed by all who had the pleasure of riding in her over the years.

The Dent Collective have had many a jolly time, buzzing about the highways and byways of England since we inherited her in 2003. Indeed, I learned to drive in her, overseen by Mrs D (what a time that was!) along the quiet lanes of sleepy East Yorkshire. I don't think she ever forgave us for moving to the Big Smoke, being a country girl at heart (Milly the car, not Mrs D) and, an incident with some local ruffians, a chase by the Police and a few other unsavoury incidents led her to being stored at my indulgent in-laws, pending a full restoration of her rapidly deteriorating bodywork. At least she enjoyed a retirement back in the sleepy countryside.

While the engine still ran like a sewing machine (and always started first time), everything else started to fall off and a combination of distance and lack of time saw no real work carried out. I think I knew the end was coming when the gear stick fell through the floor when I was running her up and down a private lane, with my little niece and nephew on my lap. They thought it all a great wheeze, but I was gutted. Then the bearings started to seize, oil seals cracking, the brakes failing and an ever increasing pile of rusty metal appearing on the ground beneath her. 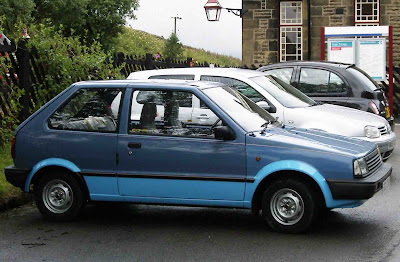 The two-tone scheme was a result of the constant battle with rust along the wheel arches, sills and doors. I think she wore the Delphinium blue with real panache! Look closely and the front wing is a different shade... courtesy of Humbrol enamel!

A well travelled machine, full of character and the trusty little 960cc engine could have gone on forever. In fact, I'm wishing I'd taken the power plant out before the Scrappie came - it could have been put to use as a stationary engine, perhaps fixed to a generator to power my shed... It had been suggested that the bodyshell was salvaged and used as a chicken shed... But sometimes you just have to let go.

At least we'll always have our memories. Pootling to York, Hull, Filey, Pickering, Dent, Torquay, Barnstaple, Peterborough, Liverpool, Gloucester and countless other places were regular journeys for Milly, all of which she took in her stride at a stately 52mph.

I even spotted her from the air once, being quite distinctive with her polka dot paintwork as the rust began to take over. How many people can pick out their car from about 5,000 feet?