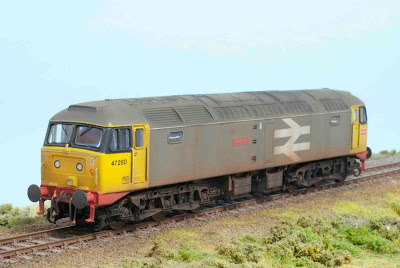 At last - the Lima/Vi-Trains hybrid Class 47 is finally completed and ready for service. Despite requiring only the fitting of glazing, wipers and a few minor adjustments, the model has languished on my 'To Do' shelf since May. However, the South Eastern Finescale flushglazing pack was eventually ordered (from Howes Models), promptly received and eventually fitted.

With the new Vi-Trains chassis, performance is lightyears ahead of the old Lima 'pancake' and the appearance of the undercarriage is also much improved. The bodyshell is pretty good for its age but, on reflection, I wonder if I've chosen the wrong livery, as the black surround draws attention to the windscreens, which is, in my humble opinion, the only area where the Italian moulding is lacking. Indeed, even though the SEF flushglaze is much better than the factory fitted 'glass', the prismatic effect at the edges, especially in the curved corners, accentuates the problem. I wonder if those whizz kids at Shawplan/Extreme Etchings are intending to add the Lima 47 to its range that already includes laser glazing for the Heljan and Vi-Trains 'Duffs'....? 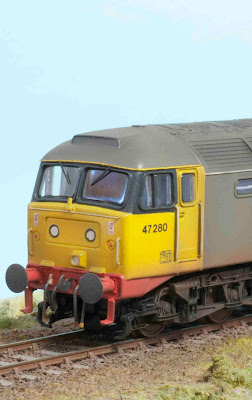 I'm chuffed that my Lima bodyshell has a new lease of life, but the windscreens still let the model down, probably made worse by the black band. No matter, at least I've got a Railfreight Type 4 in my collection and the prototype, 47280 Pedigree, was one of my favourites from my spotting days in the 1980s. The nice shiny nameplates are from Shawplan. See previous postings on this model for a full parts list.