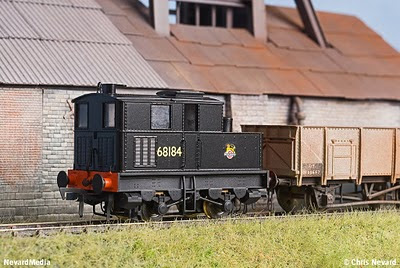 With the first quartet of exclusive Model Rail Sentinels now arriving - and almost sold out - we’re delighted to announce that a second batch will be available later this year.
To keep disappointment to a minimum following the rapid sell-out of our first BR Eastern Region ‘Y3’ model (MR-003), two additional BR early emblem versions are in development; ‘Y1s’ No. 68150 and Departmental Locomotive No. 54 – the latter based on the sole surviving ex-BR Sentinel based at the Middleton Railway in Leeds.
These will be joined by our first LMS black Sentinel – No. 7161 - which is one of three locomotives acquired by the company in the 1930s and used at various locations including Burton-upon-Trent, Shrewsbury, Sutton Oak and Ayr. The locomotives passed to BR’s London Midland Region in 1948, becoming Nos. 47181-183. It is hoped that an LMR version will follow in 2012 if there is sufficient demand.
Finally, the fourth model of Batch 2 will be decorated in lined back as preserved ex-GWR and ex-industrial Sentinel Isebrook. This version will be supplied without branding or numbers and will be an ideal base for freelance or industrial locomotives. Isebrook was the subject of the 3-D laser scan that forms the basis of our ‘OO’ gauge Sentinel and is based at the Buckinghamshire Railway Centre at Quainton Road. It was also a guest at last year’s Model Rail Live event (see separate story), where it proved extremely popular hauling brake van rides.
Orders are now being taken for all four models, which should be delivered in time for the Warley NEC show in November. Telephone 01209 613984 or place your advance order online at www.modelrailoffers.co.uk
We also have limited numbers of our GWR, LNER (fewer than 50 of each left) and BR late crest Sentinel models still available (MR-001/002/004), although these are expected to sell out shortly.
Labels: BR Dapol GWR industrial LMS LNER loco Model Rail OO preserved Sentinel Steam