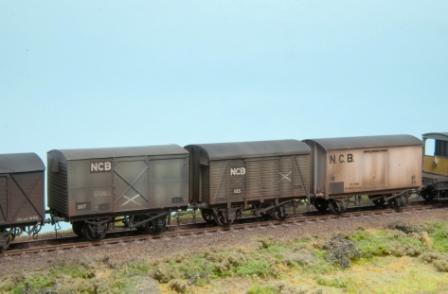 This small rake of NCB-branded vans is intended to provide a little operational variety to Maudetown, and a break from the endless procession of mineral wagons.

I've written a short article in the latest issue of Model Rail on the interesting weathering technique known as ‘pre-shading’. Adapted from what I see regularly in a number of military and aviation modelling magazines, this is something that I’ve only recently embraced. I’d been thinking of trying it for some time and limited my first forays to scenic objects, such as steel girders, a couple of turntable kits and a water tower.

It was only when I started work on my Airbrushing for Railway Modellers book that I resolved to explore the technique a bit further, especially where rolling stock was concerned. Starting with a 7mm scale wagon, the results were so pleasing that I moved onto 4mm scale vehicles and, although the smaller scale needs a bit more accuracy and control over the airbrush, I soon got used to it and it’s now become one of my staple techniques, especially for freight stock.

I’ve yet to try it in earnest on a locomotive, but I have made a few initial attempts on some scrap bodyshells by way of practice. With a few interesting steam and diesel projects coming up, I think I’ll give the pre-shading a whirl and see what happens. Meanwhile, here are some images of the finished models that feature in the article in question, in MR159 – Out Now! 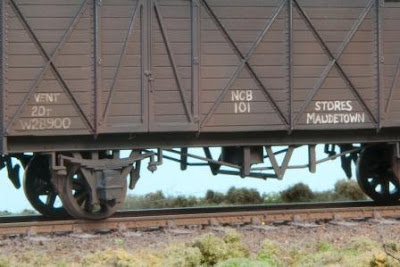 This Parkside GWR Mink van has responded brilliantly to the pre-shading method. The horizontal planking and external strengthening ribs lend themselves well to creating shadows beneath the thin layer of livery paint. 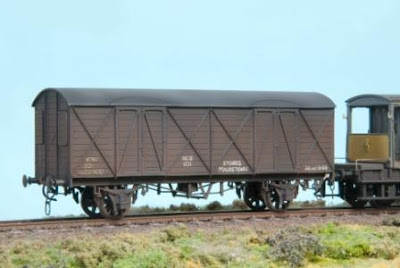 Com-Art acrylics have been used for the pre-shading, topcoat and subsequent light weathering. They’re ready-thinned and formulated specifically for airbrush use. Burnt Umber has been used for this Internal User livery. Com-Art paints are available from The Airbrush Company. 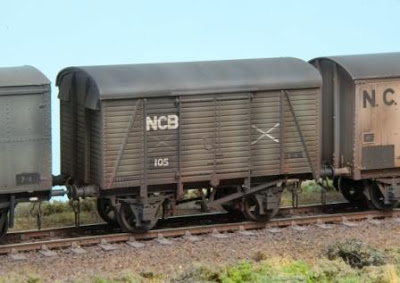 A Bachmann body on a Parkside kit-built chassis, this is another fictitious NCB stores van for my Maudetown Colliery layout. 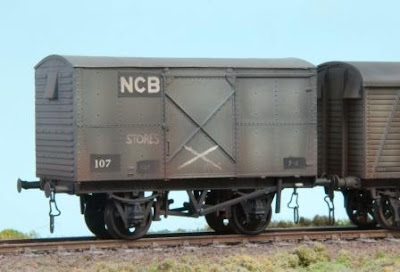 This Cambrian Models kit of an LMS steel-bodied van builds into a lovely vehicle. The delicate shading of the body panels would be much more difficult to achieve by weathering after the livery coats have been applied. However, with the pre-shading method, this convincing finish was relatively quick and easy. 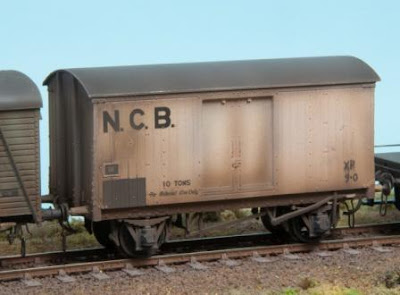 Another Parkside kit, this ex-LNER fish van is now in NCB Stores use, although it hasn’t received a running number yet. Again, the darker shading applied before the white coats bring out the relief in the mouldings.
Labels: Airbrushing book books Cambrian GWR LMS LNER Maudetown NCB painting Parkside van wagons weathering