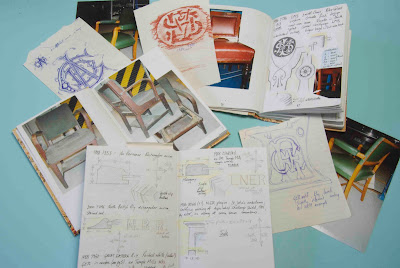 It’s amazing the amount of effort that was expended on designing and building even the most humble pieces of furniture. The tatty green moquette-covered chair on the left was found inside the NRM’s 2-BIL EMU when it arrived for cosmetic overhaul (having become a depository for tons of seagull poo whilst in ‘safe’ store).

In the dim and distant past, I found myself working at the National Railway Museum in York, as a Conservator. The job may have paid a pittance but it involved a pleasant variety of tasks, some of which were more engaging than others. Apart from the excitement of working with real and model trains, one of my other passions – furniture design and making – was also piqued by the restoration work that I was required to carry out on some of the NRM’s extensive collection of furniture.

While much of this work was fairly basic, it did allow me to closely inspect the various chairs, benches, cabinets and desks and to keep my own records of patterns, profiles and construction techniques. Having studied for a City & Guilds in furniture crafts immediately before joining the staff at York, this situation was a real boon and, at the time, it provided plenty of inspiration for the career in furniture making that I was planning.

But then the job at Model Rail magazine turned up and furniture has taken a backseat for the past 7 years. It was a nice surprise, therefore, to recently find a stack of notebooks containing measured sketches and surveys of a wide variety of furnishings from the Museum’s collection. Featuring items on display and from the stores, attention was paid to the various railway crests and monograms and everything from the plushest ‘Director’s’ chair, to a humble signalman’s stool was studied.
I’d forgotten just how much information I’d managed to gather, due mostly to a wait of over an hour at the end of each working day for a bus back to the village in which I was living. Apart from Fridays (when I usually went for a pint), late afternoons were spent mooching around with tape measure, pencil and camera. Maybe all this info will come in handy one day…? 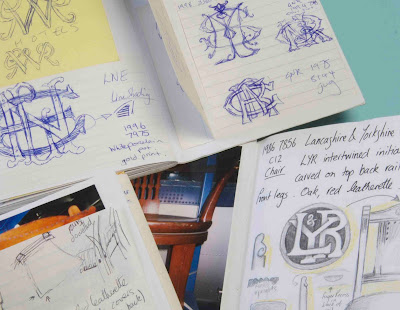 Corporate identity has also been a subject of interest and the railway companies’ obsession with branding anything and everything is a telling sign of the times. I like the way that the style of branding differed not only by period, but also by 'class'. The upper pages are sketches of logos taken from hotel and buffet crockery, the more ornate devices appearing on the poshest tea sets! 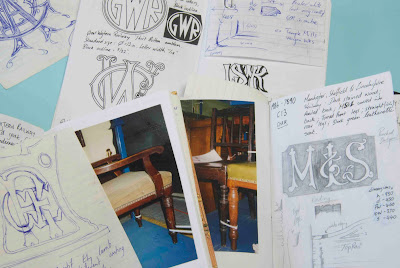 It’s easy to forget the vast amount of pre-Grouping companies that existed prior to 1922 and the various monograms could get a bit confusing at times, especially those companies who shared the same initials. The elegantly carved Manchester, Sheffield and Lincolnshire logo (right) was one of my favourites. 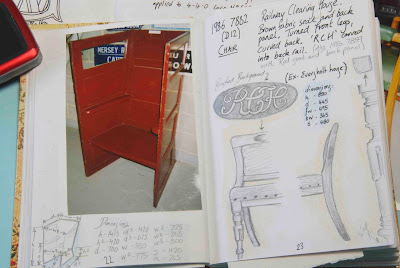 Another favourite was this red signalman’s chair, complete with glass lookout panels in the wings. Sitting in this chair in front of a cast iron stove would have been very cosy, with the tall sides being effective draft excluders! A common feature of pre-1930s signal box seating was a lack of upholstery – I doubt the companies wanted their staff being too comfortable when expected to be alert during 14-hour shifts. The Railway Clearing House also boasted some impressive fixtures and fittings.
Labels: furniture photo preserved prototype