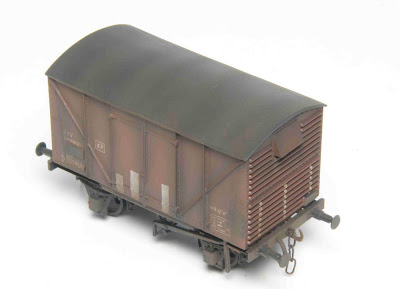 With another Warley NEC show out of the way (my 8th), the inevitable 'hangover' from a tiring but enjoyable weekend was well and truly in force yesterday. Three days away, hours stood at a stall, very little sleep and a fair few beverages consumed, meant that my head was well and truly glued to the pillow on Monday morning. It was a great show, though, and it was nice to meet so many readers - thanks to all those who popped over to the MR stand for a chat. Thanks also to those who bought models from our charity sell-off, from which we raised plenty of cash for the RNLI.

There weren't that many new models unveiled at the NEC, but there was lots of progress to be seen on forthcoming releases, most notably (for me at least) was to chance to examine one of the first production Hattons/Dapol LMS 10000 and Bachmann's BR blue Class 85... See Model Rail issue 165 for the full story of Warley 2011.

Despite the tiredness, I spent yesterday working on a few wagon kits. Back in Model Rail issue 162, we featured a demonstration of how to brush-paint your models effectively, using a BR van body as an example. Well, the kit in question – a Red Panda BR 12t shock absorbing van – has been finished off, lettered and weathered.

Using a couple of images from the amazing Paul Bartlett’s wagon photography website as inspiration, I’ve lettered the wagon by hand, complete with trios of white vertical white lines on the sides and ends (denoting the shock absorbing status). While Bachmann’s RTR 'Shock' vans and opens are splendidly rendered, with immaculate white lines, Mr Bartlett’s images show that such uniformity was the exception rather than the rule, especially on the post-1970s railway. Ad hoc repairs and peeling paint played their part in creating a plethora of different marking styles, leaving no two wagons the same.

Having settled on a 1980s period van, my model carries the departmental TOPS code ZVV, along with evidence of repairs to the doors and steel framing. There are also black patches where the old pre-TOPS markings have been obliterated.